This soap actually goes by many names - Lye Soap, Amish Soap, Appalachian Cure All, and Hunter's Soap are some I can think of off-hand. It's probably the oldest and simplest of recipes for soap. About the only thing that has changed about this recipe over the last hundreds, or possibly thousands, of years is the lye itself.

Lye traditionally was made from filtering rain water through hard wood ashes. Since it wasn't a very exact method, when they used this lye water to make soap it made it difficult to get the right mix of oils and lye. If they used too little, the soap would be too soft. If too much was used, the soap came out very hard, but also very harsh on the skin. Of the two choices, they preferred to have a hard bar of soap. This meant though that lye soap earned the reputation of being extremely harsh on the skin, to the point of leaving a person raw and red from the excess lye.

Lye soap no longer has to be this way, and is quickly becoming very popular. With modern lye, called sodium hydroxide, soapers can measure out very exact amounts of lye and make endless recipes. But the basic lye soap is the one I want to stick to here. This is the recipe I use, and I've decided to go with the name Hunter's Soap for it...

This is a soap that can be used for just about anything. It's gentle, unscented, and gives a wonderful thick white lather. I made it for two main reasons ..... to sell to hunters since they need an odorless soap, and to sell to their wives to use in homemade laundry soap. I'll give that recipe here too. Of the many uses for Lye Soap, here is a short list - cleaning the body or hair for every family member (even pets), rubbing on the runners of drawers or sliding glass doors (helps them slide easier), as a laundry soap or laundry pre-treatment (rubbed directly on a stain), placing under a mattress at the foot of the bed (I was told it reduces leg cramps - don't ask me how), and last..... but certainly the most interesting use... as catfish bait!

If you like saving money, you need to try out these recipes for laundry soap and dishwasher soap. They both use 20 Mule Team Borax and Arm & Hammer Washing Powder, which you find in the laundry isle of your store. I love all the ways you can use 20 Mule Team Borax. My three most common uses are laundry soap, dishwasher soap, and carpet power (kills fleas). 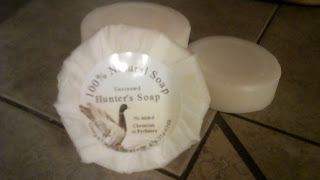 I use both of these recipes, and I'm very pleased with the results. Occasionally I'll add a couple drops of liquid dish soap to a load in the dishwasher, if I'm washing a load heavy in glassware. You'll sometimes find a mild cloudiness on glasses, but using 1-2 drops liquid dish soap, or a heavy splash of vinegar can usually clear it up. These recipes are not my creation. They've been around for a long time, but that's because they work!
Posted by Unknown at 10:36 PM